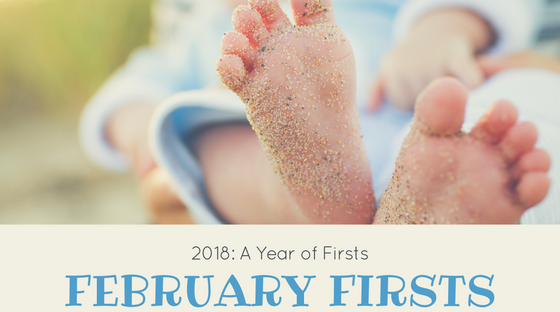 We were very fortunate to have another month full of firsts in the life of our little boy. Not all necessarily milestones you’d mark with a photo card, these firsts meant something to us and hopefully made memories for our little munchkin.

First seat in high chair
So in January we tried weaning, with the wee fella enjoying his first tastes of a variety of foods. Unfortunately, as he was weaned earlier than recommended, he wasn’t quite strong enough to sit upright in a high chair for the amount of time it took to feed him. So, we had to wait until he was a bit bigger, and on the day he turned 4 months old (6th February) we put him in his Chicco high chair for his breakfast (banana porridge since you asked) and haven’t looked back since. The Chicco high chair we chose has three different reclining points so it means Travis doesn’t need to sit absolutely straight, and it has proved a great help in terms of limiting mess when feeding and also encouraging the wee man to sit up on his own. This particular version is also designed for travel, folding neatly and with a useful handle which makes carrying easier. It will be very handy if we make road trips which involve staying over or for at least most of the day.

First Valentine’s Day
Of course he didn’t have a clue what was going on, but that didn’t stop me celebrating Valentine’s Day with my little cherub. Any old excuse to dress him up, I bought a lovely heart outfit from PitPat and got a rose for him to give his first Valentine, his gran. Rather than just describe how cute it was, you can see for yourself via my Instagram post:

First road trips
This leads on nicely to Travis’ first road trips. As he was born at a time where the nights were beginning to get longer and darker, we didn’t really plan too many road trips in the first few months of his life. Lovely autumnal walks in the park during the day or trips to the supermarket were just about all he saw of the outside world in 2017. With the exception of one trip to Glasgow to visit my work colleagues, he hadn’t been much further than 5 miles from home at any given time. So after the threat of winter weather was over (at least we thought so at the time) with milder, brighter days, we ventured further afield. Firstly we headed to Ayrshire on 15th February to visit his future wife, aka the new baby daughter of one of my friends. Nervously mum sat in the back of the car while dad drove, just in case the wee man got upset or needed fed/entertained at any point. I struggled to make a bottle on the potholed streets of Prestwick, but naturally he was fine and slept until we got there. So you would be forgiven for thinking that we would have gotten braver by the time the Dunoon adventure rolled around on 23rd February, but the same rules applied. Although this time he was much nosier, taking in the lovely scenery of Argyll and Bute on the way home.

First birthday party
Part of the same weekend as his Dunoon adventure, Travis got to go to his first, first birthday party. My best friend’s little boy turned 1 on 24th February, and was having a Mickey Mouse themed party to celebrate. Of course I went and got the biggest Mickey balloon I could find, and a Mickey Mouse dress-up outfit for my little man to party in style. And of course the hat didn’t fit. Curse his huge head! He definitely enjoyed the party more than I thought he would for someone so young, though that might have something to do with the napping and the feeding mid-party. It’s worth noting that he’s been to a 2nd birthday party already, and went to a birthday dinner for an adult, but this time he was awake for long enough to at least smile at half the guests! It probably helped that it was a lovely day, and that Travis dotes on the birthday boy, but he was so well behaved that I’m now looking forward to his next party invite and him being awake for longer to take it all in.

First night out!
Hardly a big party or anything, but as we’d made a sort of unspoken rule that we wouldn’t take or keep Travis out past 7pm, this was a big step and exciting moment for us. The Botanic Gardens in Glasgow hosted a weekend of mystical magic at the end of the month, promising light displays, sounds and stories, not to mention plants too. Seeing as trees and lights are pretty much Travis favourite things after food, it was a no brainer to take him there. Along with his best pal, we took a trip up for the 6pm walk on Sunday 25th February. It was a fantastic end to a busy weekend for us, although it was blooming freezing! I would say that the wee ones were a bit agitated when the tales of the history of the Botanic Gardens were being told, probably because they don’t really understand ghost stories or tales of Brownies and things yet. Boy did they love the lights though. And the fire dancers. Travis was particularly amused by a lit up skeleton-come-scarecrow which already makes me terrified of what sort of stuff he’ll be into when he gets older.

First snow-in
Of course we weren’t over the winter by the end of February, this is Scotland we’re talking about! So, as the dreaded Beast from the East rolled in on 28th February, we were all a bit miffed but not surprised at this turn of weather so close to spring. However, nobody could have predicted just how much snow we would be left with – a whopping 49cm where we live (the largest snowfall from the storm in the whole of the UK, in case you were wondering). Naturally, as the wee man is only currently 20cm bigger than the height of the snow – also, comfortingly measured in Irn Bru cans here – we ended up pretty snowed in. I can’t remember snow so persistent in my lifetime, never mind the little fellas, but I’ll certainly remember how demented we became as we were stuck in the house for about 4 days. In fact, today is the first day we’ve actually been able to get a pram out (now 6 days post-initial snowfall), and even then it has been a struggle on some streets which have yet to be properly cleared or gritted. Thank goodness for air tyres!